Traditional Korean dwellings, known as Hanok (한옥) are an important part of Korean structural design and history, demonstrating the country’s distinctive architectural past. 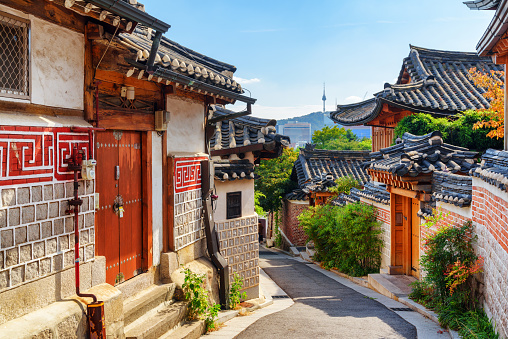 The term Hanok was introduced to distinguish the traditional Korean house style from the usual western model. They are designed to integrate with the natural environment and provide sanctuary and comfort, and despite being notably Korean, Hanok are unique from the mass produced studios found in many of the country’s jam-packed municipalities.

You may hear the term baesanimsu – (배산임수) – which stands for mountain to the back, facing the water. This principle ensured easy access to water, ample sunlight, and shelter from the chilly mountain breeze. Built using a variety of materials such as wood, clay, stone, dirt, straw, tiles, and traditional Korean paper derived from the bark of the mulberry tree (hanji), these structures are ecofriendly, inexpensive, and tailored to the weather, geography, and societal class.

Hanok are recognized for their unique heating system known as ondol.  Temperature regulation was an essential part of the construction process, which resulted in the placement of a layer of stone beneath the flooring so that when heated, the warmth would flow throughout the home. It is likely that ondol influenced  the practice of sitting on the ground for leisure, eating, and sleeping, as well as the removal of shoes when entering a home.

While examining the foundations of the Hanok, you may notice a certain level of intricacy that distinguishes these buildings from many others. The surroundings of a typical Hanok have indeed been left untouched, in marked contradiction to the lavish exhibitions found in the West as well as other parts of Asia. There are no fancy man-made gardens or grandiose displays. The organic aesthetic of the Hanok served to highlight the magnificence of the surrounding environment.

In a nutshell, nature is the garden. It said that by leaving the courtyard empty, it could hold all things.

While the Hanok style of housing is not normally used in modern-day Korea, a good number of villages have worked to preserve what is left. If you take a trip to South Korea, there are quite a few places to experience the serenity of the Hanok.

In a world dominated by sleek, modern architecture, it’s refreshing to look back and enjoy the charming handiwork of those who came before us. Architectural works can teach us so much about a culture, and as we learn, we should embrace these traditional styles of living to create quality living spaces for future generations.